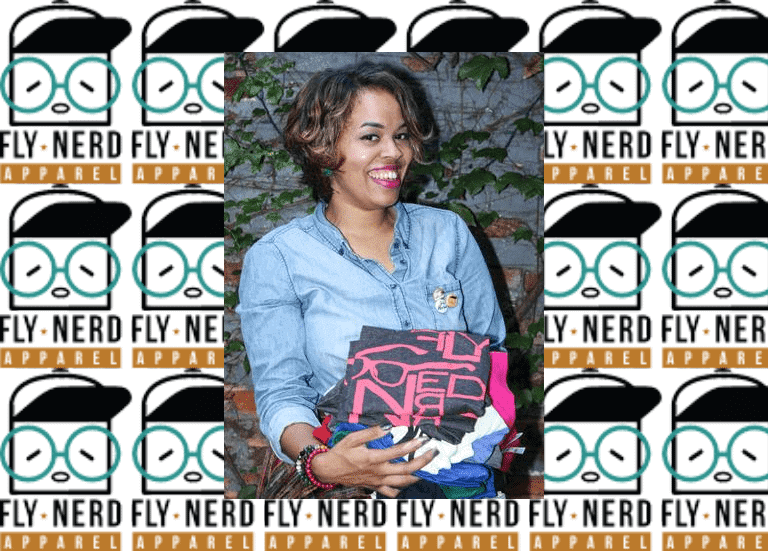 # OF YEARS “MAKING” IN BALTIMORE

# OF PRODUCTS “MADE” IN BALTIMORE

# OF PEOPLE ON FLY NERD TEAM

WHEN PEOPLE HEAR THE WORD, “NERD,” THEY IMMEDIATELY THINK “UNCOOL.” WHEN PEOPLE HEAR THE WORD, “FLY,” THEY IMMEDIATELY THINK “STYLISH.” WELL, THE GOAL AT FLY NERD APPAREL IS TO MAKE PEOPLE REALIZE THAT THERE’S NOTHING WRONG WITH BEING QUIRKY. IN FACT, THE “FLY NERD” SERIES EMBRACES IT! SHOW OFF YOUR QUIRKY SIDE WITH THESE AWESOME T-SHIRTS, HATS, BUTTONS, AND MORE! PRODUCTS ARE MANUFACTURED CONSCIOUSLY WITH A WATER BASED, NON-TOXIC INK.

Favorite Things About Making in Baltimore:

The community of makers here. There are so many talented makers here that are willing to connect and support each other via groups like Baltimore Etsy Sellers.

Time is our biggest challenge, it’s actually an ongoing issue…if we could just have 2 more hours in the day we would be good.

WHAT FUN FACTS WE SHOULD KNOW ABOUT FLY NERD APPAREL:

Hmm…I started screen printing because I bought a YUDU machine on clearance at Joanns or Michaels. Then, I learned to rig it via Youtube and working among the talented folks at Plaza Art in Towson. And my very first vending event was at my nephew’s elementary school. I was one of 3 vendors. It was JUST 3 of us. Humble beginnings. MAKING IN BALTIMORE FOR 3 YEARS NOW, ABBIE IS A TEAM OF ONE CRAFTING HANDBAGS FROM SCRATCH. COMBINING PRINTING, DIPPING ...
Read More #FUNFACT : PROVIDING A PACKAGE MORE EFFICIENT FOR ONE OF ARNOLD PACKAGING CUSTOMERS HAS CUT 20 TONS OF PAPER OUT ...
Read More Originally from New York City, Lawrence was a middle school teacher. Once he moved to Baltimore, he used his love for ...
Read More
Subscribe